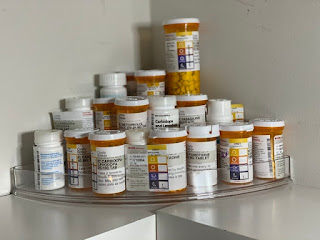 This is a late night, mostly unedited rant about generic Sinemet and 12 years being in the wrong one.


There’s really nothing humorous I can say about this post. I’m really pissed off and I’m rather shocked.

In medicine an unexpected finding is called an “incidental finding”. In casually researching Parkinson’s disease, which means glancing through the various Facebook groups I belong to, reading up on various sources and feeds, occasionally come across an “incidental finding” also. I ran into one today, on the heels of becoming aware, or rather re-aware, of something I heard on a podcast. It pisses me off more than I can express, that this basic piece of knowledge, which could’ve changed my quality-of-life for the last 14 years, was just not addressed.

As I have written about, the worst of my Parkinson’s is medication fluctuations. Wearing on and off. When our meds are working, we can move but as the disease goes on our meds don’t work anymore. They are either too high or too low. When they are too high we thrash about and cannot stop moving or control movement. When they’re too low we are frozen and it is very difficult to move. Our bodies become rigid and mine twists and rotates to one side.

Everything I do in my life has to be framed within these 2 1/2 hour cycles. Until four months ago, I had 45 minutes out of each 2 1/2 hour cycle where I completely couldn’t function.

When you have so much off time, and on time is so limited, there’s not much you can plan to do. It’s hard to be with people for a long time and it’s hard to nail the hour and a half when you’re actually closer to normal.

When medicines ware off, faces become expressionless, voices become expressionless and people react to you as though you are as emotionless and stonefaced and depressed as you look. The more people reacted that way the more you kind of become that way. You look around the world and you see a bunch of exuberant faces and people who can maintain their moods for more than an hour and a half. And you can’t. And it’s not mind over matter.

This is more than fits in a post but gives you an idea of why am so pissed off.

In a podcast link below, the title being “When Life Gives You Parkinson’s”, I listened to an episode on the shortage of Sinemet in the world. Within the podcast was a brief interview with  a
Patient who explained why the variation in different manufacturers of generic Sinemet is so impactful  for treating Parkinson’s disease. Taking one generic over another may not matter in some illnesses, but it matters a lot and Parkinson’s do to the nature of the disease.


For the last 14 years plus and I have been taking Sinemet I have asked for a specified generic, “sun pharmaceuticals.” “it is an oval shaped pill and I could swallow it better than the typical round ones. Countless times the pharmacy has made a mistake and given me the round pills by various generic manufacturers. I sent them back each time.

After listening to the podcast my mindset had changed and when CVS, once again, gave me the wrong generic, I did not give it back. I used it. And I was shocked that my ofttimes were significantly better. Where as before, I was off for about 45 minutes of every 2 1/2 hours. (I take meds every 2 1/2 hours.)

For some reason I was actually stretching near my next dosage. Sometimes I didn’t wear off at all. It was such a significant difference that I started to You’re out what was causing the change. I thought maybe it was my training, maybe it was receiving care from an aid and the reduction of stress from that, and maybe it was from a change I had made in the mirtazapine I take, Which has resulted in my being better able to sleep.

This change may some ramifications in my eligibility for the clinical trial I think I’m starting. Because At the time I was referred, I was on the oval shaped generic where I had a lot of off times. And since that time I have had far less off periods and the trial requires and I have 2 1/2 hours of us. Per day.

I was reading a post on “StrongHER Women“ a private Facebook group for women with Parkinson’s. A patient posted about being switched to Sun Pharma brand  generic Sinemet and was experiencing more off times. She wondered if it was possible that was due to the generic. I was blown away because it’s confirmed my experience that I had a lot more often times on that generic.

I’m pissed off  that all these years that I’ve been struggling with off times, why was it not suggested to me that I try another generic. In fact why aren’t  all patients advised to try a different generic from time to time just to see if they do better. There’s no hesitation to offer deep brain stimulation surgery. or add  layers of new medications. Why don’t doctors from time to time  try patients on a different generics?


This is a huge reminder to everyone with Parkinson’s that your story, your questions, matters to all of us. It may save some of our lives and that’s not an exaggeration. We are winging this disease. No one knows what causes it. No one knows how to treat it. And no one has ever had any experience with our generation. patients, diagnosed young, whose disease is advancing, and who are still relatively young. who have taken an Unprecedented number of different drugs for an unprecedented number of years as we have.

I wanna make a note of this because the “incidental information“ I found, is not the kind of information that’s gonna be repeated through various Facebook groups and news channels. This is one woman’s experience who happen to post about it. And I happened to read it. And it may happen to change some lives.

We have to learn from each other. We have to share of the itty-bitty’s of our life. We have to ask the questions.The information I get from one patient is far more life-changing than 10 multi billion dollar studies of Parkinson’s medications.

To all of you who post and share and ask, thank you. You are lifesavers. To those of you that don’t, please start. Please know that everything you contribute and everything you share, could make a difference in someone’s life.
on January 02, 2020

Get new posts by email.

Natick, MA
Info page for Women with YOPD & PD Support Group for women of all ages from all over. Meetings 1st Saturday of the month in Natick, MA