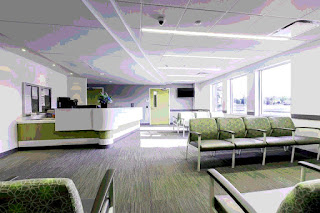 I have heard newly diagnosed patients give these reasons for seeing a General Neurologist instead of a Movement Disorder Specialist:

"I'll wait until I'm worse before going to a Movement Disorder Specialist."

I hate to burst your denial bubble, but you already have full fledged Parkinson's disease. You may think you are just dipping your toes in the PD waters, but your whole body has been fully immersed those waters long before you were diagnosed. You don't have Parkinson's Disease Lite. They don't make it.

You'll probably get to "worse" faster if you are seeing a General Neurologist. Studies show that patients who see a GN fare worse than those seeing a MDS.

PD doctors follow you over time. A long time. Perhaps 20-30 years or more. Each doctor has a different feel for interpreting your progression, even though they may all use the same measurement scales. There is a learning curve that takes some time when doctors see a new Parkinson's patient. They have to get to know about your life, your lifestyle, what happens when you are under medicated/over medicated. They learn how you respond to various meds, drug interactions and how your other health problems fit in the mix.

There is no way to transfer this knowledge to another doctor. The next doctor has to ramp up their understanding of you from scratch and they will never know what you were like when you were first diagnosed. Their goals for you might be set relative to other patients diagnosed when you were, rather than against your full potential.

A common time to want to change doctors is mid-stage PD, when your meds don't seem to work as well and your doctor seems slow to make changes in your meds to get you back on track. You see other patients doing better than you and you start asking around for who they see. You book an appointment with their doctor who may have a different approach.

Mistake. I've made this one. I saw the same MDS for 12 years, and then made a change. My new MDS didn't know me from the get go. He didn't know how far I'd slid and what my potential should be. He compared me to how I was doing against other patients who'd had PD as long as I had. Given that I was doing better than most, he was satisfied with where I was at.

I was not okay with that. I don't care at all how I'm doing compared to other patients. My goal is not to get worse more slowly or even to be better than I was. My goal is to get better than I am. I went through a year of hell, being underestimated and under-medicated. It was a mistake to change doctors mid-way.

If you plan to hold off on seeing a MDS until you are worse, you will be short changing yourself of the value of having one doctor see you from the start.

While on the topic, think twice about starting with a MDS likely to retire during the next ten years or so. You will set yourself up to be changing doctors midway and will have to find a new doctor whose practice is open at the same time as all the other patients in the retiring MDS's practice.

"The GN tells them he/she takes care of lot of Parkinson's disease and knows all about PD."

No matter how many patients your GN sees, your Movement Disorder Specialist sees more.

No matter how much GN knows, your Movement Disorder Specialist knows more. GN see patients with at least 100 neurological disorders. A MDS focuses primarily on PD, and movement disorders such as dystonia and tremors. You are much less likely to be misdiagnosed by a MDS than a GN.

GN do not see patients in the resource rich centers offering patients a team of PD health care professionals that is offered by MDS in one of 48 medical centers around the world, including 34 in the United States" designated as "Centers of Excellence" by the Parkinson's Foundation. A lot of research trials take place at these centers, and doctors are more involved in trials and their patients more likely to be referred into trials.

MDS know better than GN how medications really work. Drugs work differently in patients than they do in clinical trials. In trials medications are looked at separately. In real life patients take many different drugs. When new drugs are approved, it is the doctors who are seeing the most patients that have a more accurate guess about who the new drug will help. New drugs are usually insanely expensive and your MDS is more apt to make the case for your insurer to cover the drug.

When you have PD, you will have urgent questions for your PD doctor. MDS and their clinics are set up to have MDS on call for you 24/7. MDS understand the urgency of patient calls.

There is a new bimodal shift in patient gender. In older people, more men are diagnosed with PD than women. In younger people, more women are diagnosed with PD than men. Women are typically diagnosed a few years later than men. At the time of diagnosis, they have more residual dopamine in their brains. Women tend to have tremor predominant PD, which has a slower progression and yet women do not fare any better than men and possibly worse. Why? Perhaps because women are 25% less likely to see a MDS than men.

Get new posts by email.

Natick, MA
Info page for Women with YOPD & PD Support Group for women of all ages from all over. Meetings 1st Saturday of the month in Natick, MA